Marburg virus disease is a highly virulent disease that causes haemorrhagic fever, with a fatality ratio of up to 88%. It is in the same family as the virus that causes Ebola virus disease. Two large outbreaks that occurred simultaneously in Marburg and Frankfurt in Germany, and in Belgrade, Serbia, in 1967, led to the initial recognition of the disease. The outbreak was associated with laboratory work using African green monkeys (Cercopithecus aethiops) imported from Uganda. Subsequently, outbreaks and sporadic cases have been reported in Angola, Democratic Republic of the Congo, Kenya, South Africa (in a person with recent travel history to Zimbabwe) and Uganda. In 2008, two independent cases were reported in travellers who visited a cave inhabited by Rousettus bat colonies in Uganda.

Human infection with Marburg virus disease initially results from prolonged exposure to mines or caves inhabited by Rousettus bat colonies. Once an individual is infected with the virus, Marburg can spread through human-to-human transmission via direct contact (through broken skin or mucous membranes) with the blood, secretions, organs or other bodily fluids of infected people, and with surfaces and materials (e.g. bedding, clothing) contaminated with these fluids.

Illness caused by Marburg virus begins abruptly, with high fever, severe headache and severe malaise. Muscle aches and pains are a common feature. Severe watery diarrhoea, abdominal pain and cramping, nausea and vomiting can begin on the third day. Diarrhoea can persist for a week. The appearance of patients at this phase has been described as showing “ghost-like” drawn features, deep-set eyes, expressionless faces and extreme lethargy. A non-itchy rash has been noted between 2 and 7 days after the onset of symptoms.

Many patients develop severe haemorrhagic manifestations within 7 days, and fatal cases usually have bleeding, often from multiple areas. Fresh blood in vomitus and faeces is often accompanied by bleeding from the nose, gums and vagina. Spontaneous bleeding at venepuncture sites (where intravenous access is obtained to give fluids or obtain blood samples) can be particularly troublesome. During the severe phase of illness, patients have sustained high fevers. Involvement of the central nervous system can result in confusion, irritability and aggression. Orchitis (inflammation of the testicles) has been reported occasionally in the late phase (15 days).

In fatal cases, death usually occurs between 8 and 9 days after onset, usually preceded by severe blood loss and shock.

Supportive care – rehydration with oral or intravenous fluids – and treatment of specific symptoms improves survival. There is as yet no proven treatment available for Marburg virus disease. However, a range of potential treatments including blood products, immune therapies and drug therapies are currently being evaluated.

It can be difficult to clinically distinguish Marburg virus disease (MVD) from other infectious diseases such as malaria, typhoid fever, shigellosis, meningitis and other viral haemorrhagic fevers. Confirmation that symptoms are caused by Marburg virus infection are made using the following diagnostic methods:

Samples collected from patients are an extreme biohazard risk and laboratory testing on non-inactivated samples need to be conducted under maximum biological containment conditions. All biological specimens must be packaged using the triple packaging system when transported nationally and internationally.

WHO supports containment of rare virus on Uganda-Kenya border

Prioritizing diseases for research and development in emergency contexts

Preferred Product Characteristics for Personal Protective Equipment for the Health Worker on the Frontline...

ObjectivesTo provide a review and summary of current evidence on protective effects of PPE and applicable standards, and to identify the knowledge gaps...

How to safely ship human blood samples from suspected Ebola or Marburg cases within a country by road,...

How to safely collect blood samples by phlebotomy from patients suspected to be infected with Ebola or...

World Health Organization. (‎2014)‎. How to safely collect blood samples by phlebotomy from patients suspected to be infected with Ebola:...

Guideline on hand hygiene in health care in the context of filovirus disease outbreak response : rapid...

This document provides a summary of the recommendations for hand hygiene best practices to be performed by health workers providing care and/or support...

Personal protective equipment for use in a filovirus disease outbreak

Filoviruses (Ebola and Marburg) are highly contagious pathogens, which cause severe and often fatal illness in humans. Health workers are at increased risk...

This pocket guide provides strong support for the practical application of key lifesaving interventions that are feasible in an ETU as well as interventions...

Steps to take off personal protective equipment (?PPE)? including coverall

Posters with detailed instructions for health-care professionals on how to remove personal protective equipment (PPE) before and after visiting a treatment...

Posters with detailed instructions for health-care professionals on how put on and how to remove personal protective equipment (PPE) before and after visiting...

Interim infection prevention and control guidance for care of patients with suspected or confirmed filovirus...

This document provides a summary of infection prevention and control (IPC) measures for those providing direct and non-direct care to Ebola patients in...

Guideline on hand hygiene in health care in the context of filovirus disease outbreak response : rapid...

This document provides a summary of the recommendations for hand hygiene best practices to be performed by health workers providing care and/or support...

This guide to local production of WHO-recommended handrub formulations is separated into two discrete but interrelated sections:Part A provides a practical...

How to safely ship human blood samples from suspected Ebola or Marburg cases within a country by road,...

How to safely collect blood samples by phlebotomy from patients suspected to be infected with Ebola or...

World Health Organization. (‎2014)‎. How to safely collect blood samples by phlebotomy from patients suspected to be infected with Ebola:...

This field workbook supports the implementation of the interagency (FAO, UNICEF, WHO) “Communication for Behavioural Impact (COMBI): A toolkit for...

This interagency (FAO, UNICEF, WHO) toolkit will be useful for anyone wanting to design effective outbreak prevention and control measures in community...

How to conduct safe and dignified burial of a patient who has died from suspected or confirmed Ebola...

This protocol provides information on the safe management of dead bodies and burial of patients who died from suspected or confirmed Ebola or Marburg virus...

Experts mine bats in search of Marburg reservoir

Bringing the Marburg outbreak under control in Angola

Responding to the Marburg outbreak in Angola 2015 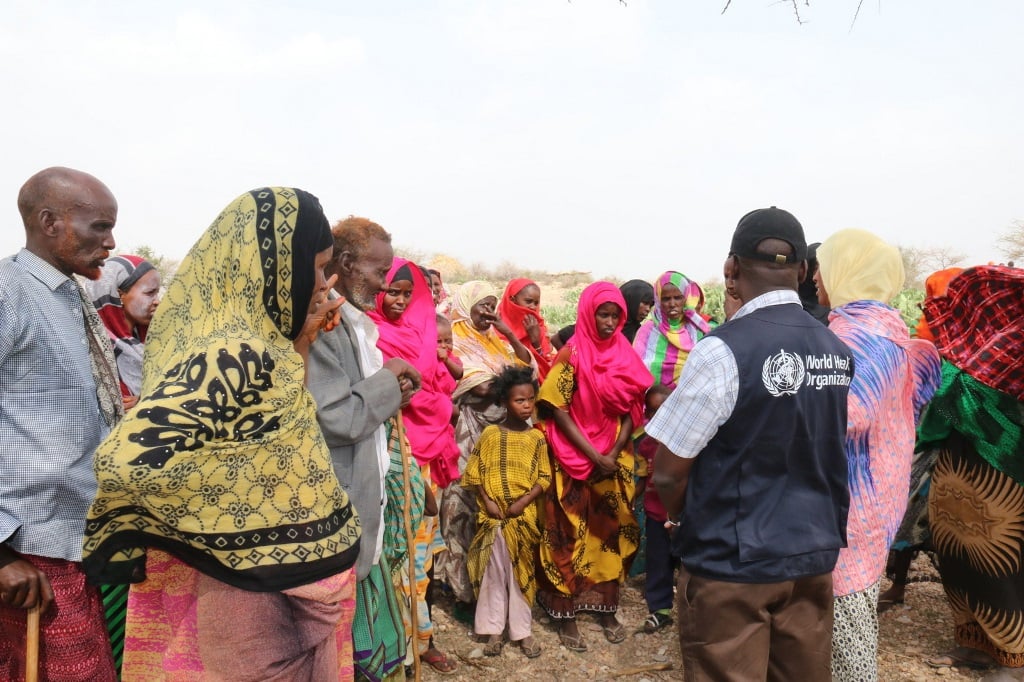 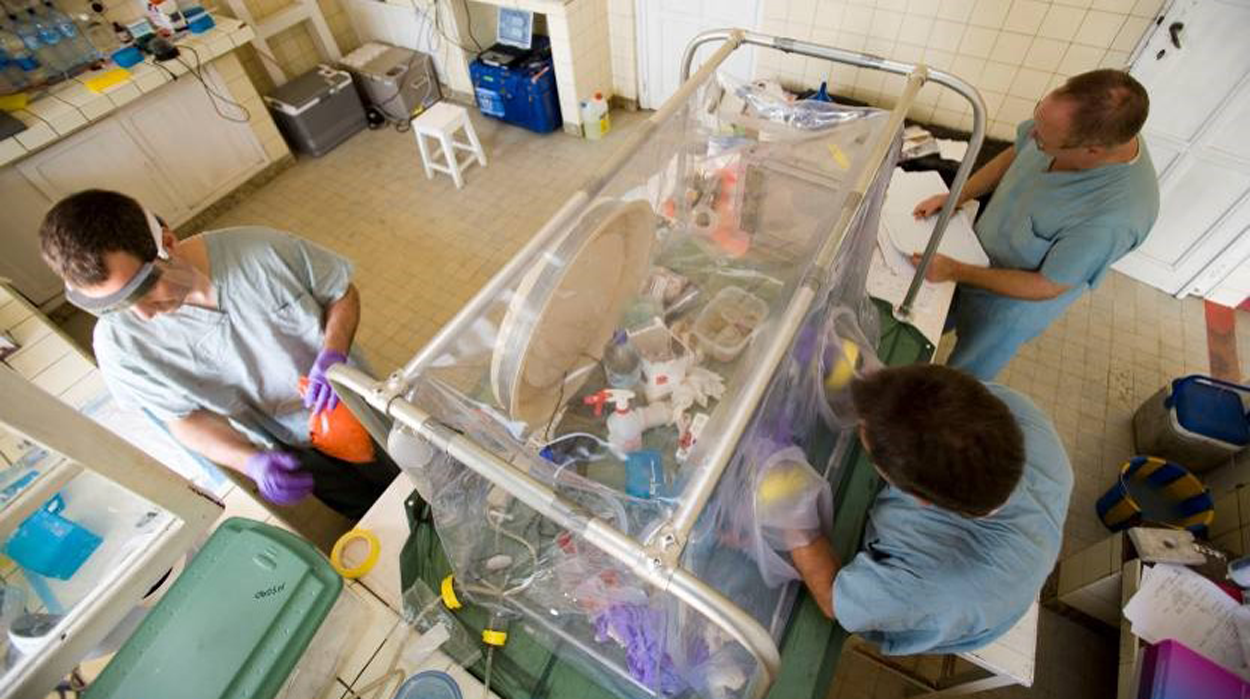 For any request please send us an email to: [email protected]